To report an animal that is sick, injured or distressed please contact the National RSPCA Cruelty Line on 0300 1234 999 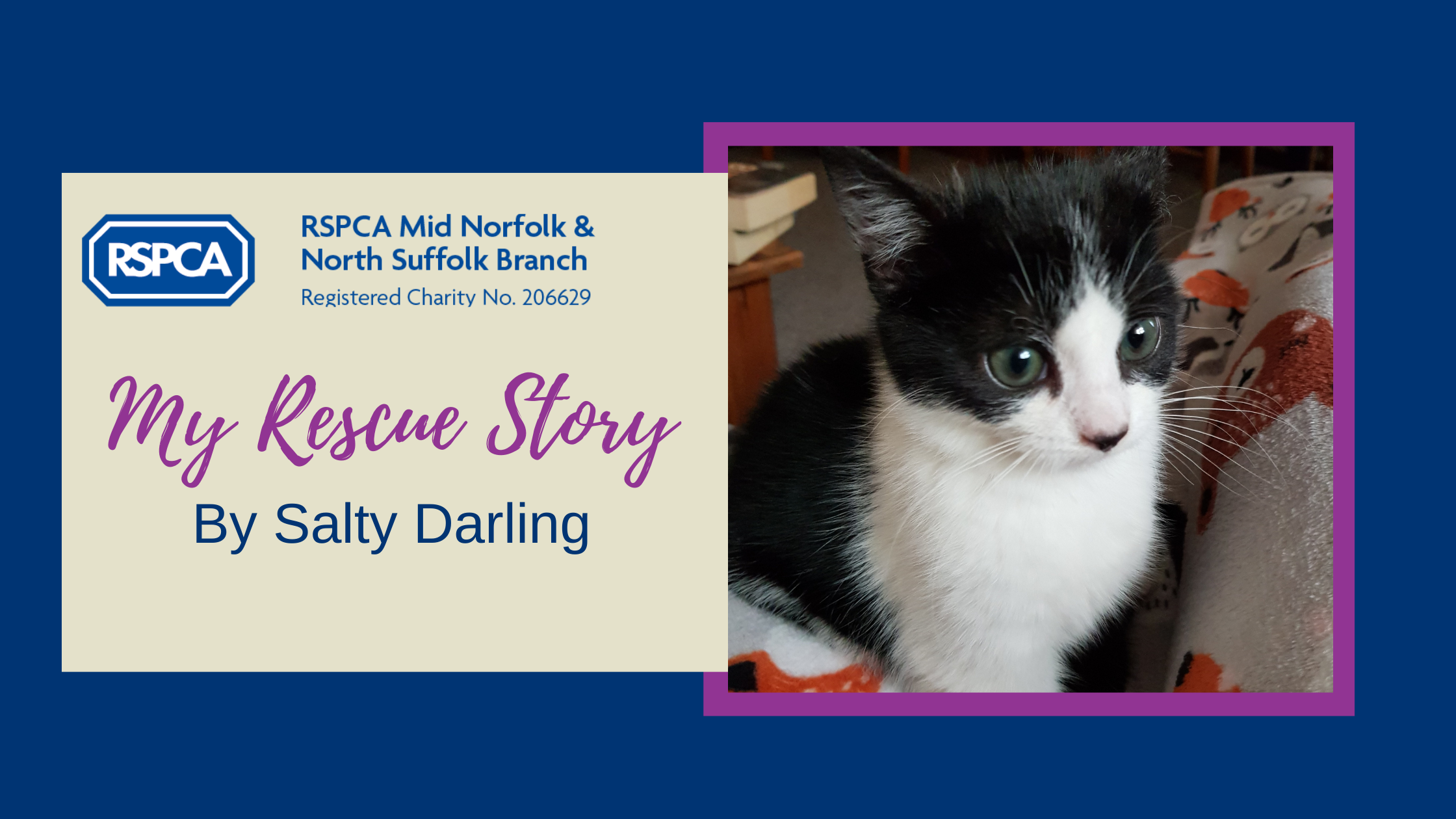 I was born in November 2019. I cannot remember much before I was rescued but all I know is I didn’t very feel well at all. I lived outside with lots of other cats in the wild; I heard those hoomans calling us a feral colony or something. One day, it was very cold and I remember seeing some different hoomans around. They had some tasty tasty food and were feeding us in these contraptions. They were also taking some of the other cats and they were returned later, with a small area shaved! These were the craziest of my many many cousins! I think they were far too wild to go to an indoor house, they would not be able to adapt, and they were happy and healthy outside. I learnt they also had a snip; at the time I didn’t know what that was, but I found out later hoomans also call it neutering. I think it means they cannot have more babies so our colony doesn’t get bigger and bigger. Some cats they had to keep because they were not doing so well. I was one of them.

I hadn’t eaten much and I kept sneezing all the time, my eyes had water coming out of them and my right eye was very sore. They took me to a bright place that smells weird and some other hoomans looked after me. I couldn’t eat or drink on my own so I had to have help, although I wasn’t really hungry to be honest. I couldn’t go to the toilet; all I could really do was sleep. Sometimes I managed to knock my food and water everywhere so the hoomans didn’t know if I had had a wee or a drink or anything! They gave me breakfast through a tube thing in my mouth, a syringe I think. I had special tablets and drops in my eyes that made me feel better and the hoomans seemed kind, like they liked me. They kept saying ‘Hello Salty’ whenever they appeared and gave me food so I started to learn it was a good thing! I was still unsure and a bit nervous as this whole thing was weird for me. After a while, I started to feel hungry and a little better. After the hoomans gave me more special tablets and after staring at me for a few days, to make sure I was being good and eating all of my dinner, I was ready to leave. I still felt a little weird but lots better. I was too little to go back to the colony and a bit too unwell for a new home, so I went to an indoor house, with a foster hooman where I could recover.

I was scared of the new indoor house at first, but the foster hooman made me a hiding place in my crate so I felt safe. 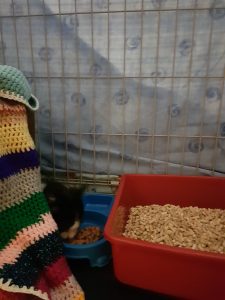 Here I am hiding and just coming out for food and toilet. 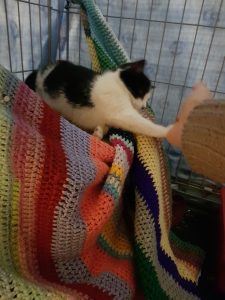 Then I got a bit brave and touched the hooman!

They also had another big cat, floppy ears, waggy tail and they called it dog. Strange, I think she was waiting for a new home too. I was nervous, but you know being a kitten and all I couldn’t resist the urge to pounce! I really wanted to be friends with foster hooman and dog so I tried my best and when I was ready, I ventured from my hidey hole and onto this squishy substance called carpet, which I must warn you, do not poo on! The hoomans told me this isn’t a litter tray! 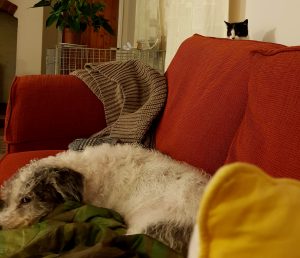 Me being really brave and checking out dog.

Not long after, the lock up thing hit and that meant the hooman and dog didn’t go to work anymore. I loved it! I got so much attention; who knew that having cuddles was so much fun! Me and the dog, I think her name was Tinks, became great friends and we followed the hooman around everywhere! 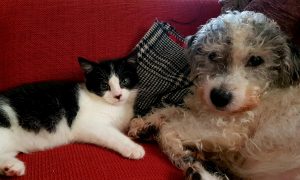 Me and Tinks just hanging out. I liked to cuddle her on the sofa because she was soooo fluffy and  nice! She made me feel at home and told me all about foster hoomans and what they do. My foster hooman had a kitten before me and it went to a new forever house. Some foster hoomans have even smaller kittens than me that have to be fed by a bottle, and even other animals too.

After lock up, I was meant to go to a new permanent indoor house as I was strong enough to move to a new place. But the foster hooman couldn’t let me go and now, I live here forever!  I was about 3 months old when I arrived and I looked after her when she didn’t feel well. I also helped her with all of her work during lock up, tidying her paperworks, organising her pens, sitting on her box called a lap tops (I mean it’s inviting calling it a ‘laps’-top) so I am not surprised she kept me and it’s going to be for forever too!

The Branch as a whole works really hard and without each and every department, it could not helps me, my cousins or achieve the great results it does for animals in need, just like me.

But I was also told the Branch could not run at all if it wasn’t for these hoomans called supporters and volunteers. I would not have been rescued if the supporters did not donate or did not support us on the social thing, like Facebook.

So I want to say thank you, to all of you for rescuing me. 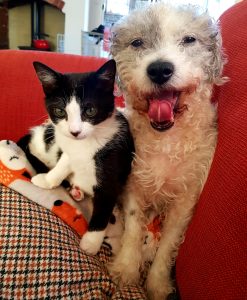 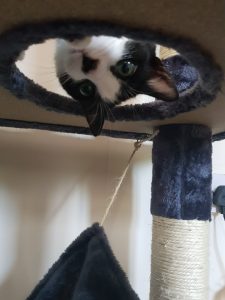 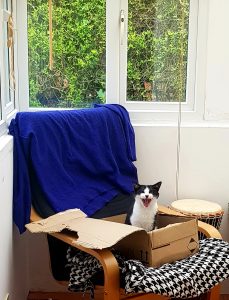 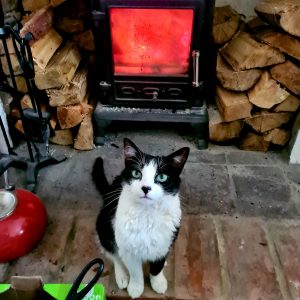 Me after being outside in the rain. I do love to play outside!

Want to keep in touch?

Sign up to our newsletter by clicking here and get all of our latest news, events and stories about our finned, furry, scaly and feathered friends straight to your inbox every month.

Cookies are small text files placed either temporarily or permanently on your computer by websites that you visit which collect and record information, including your IP address. Each time you visit one of our websites, your browser will send the cookie file back to the website's server on each subsequent visit unless you alter your browser settings.

We use cookies to enhance the experience of the user as well as to record site usage data anonymously.

Examples of ways we may use cookies to record information include:-


For more information on how we handle your personal information, please see our Privacy Notice.

By continuing to use our website, you consent to our use of cookies and those we use will be stored on your device unless you change your cookie preferences in your browser.

Our website may also contain hyperlinks to third party websites that are owned and operation by other organisations. These websites have their own privacy policies, including policies on their use of cookies, and it is important that you read them as they will govern the use of any personal information you submit or which is collected by cookies whilst you browse that website. We cannot accept any responsibility or liability for the privacy practices of third party websites and your use of such websites is at your own risk.

These cookies are needed in order for our website to function and are designed to improve your website experience.  They're usually only used in response to you accessing one of our services such as filling in our online forms such as our neutering voucher application or by making an online donation to us; without the cookies the service cannot be provided to you. You can set your browser to block these cookies but some parts of our site will then not work as you would expect. These cookies do not store any information that could identify you and they are usually only set in response to an action (e.g. you filling in a form).

These cookies allow the website to remember choices you make (such as remembering whether or not you would like to hear about our newsletter) and exist to provide enhanced, more personal features. The information these cookies collect may be anonymised and they cannot track your browsing activity on other websites.

Performance cookies collect analytical information using Google Analytics about the pages on our website which have been visited, how many visits they receive, how often and where visits come from. The cookie has no way of identifying you, it doesn't hold any of your personal data nor can it be used retrospectively to track you. These cookies help us to ensure we can develop our website to provide the content you find useful and engaging. For more information on what information Google Analytics collects and how it is stored, please see their privacy policy: https://policies.google.com/privacy

If you wish to reject or disable any cookies which are set by our websites, you can do this through your browser settings. For your information, here are links to show you how to change in cookie settings for various browsers:

You can find out more about cookies at www.allaboutcookies.org.
Necessary Always Enabled

Any cookies that may not be particularly necessary for the website to function and is used specifically to collect user personal data via analytics, ads, other embedded contents are termed as non-necessary cookies. It is mandatory to procure user consent prior to running these cookies on your website.